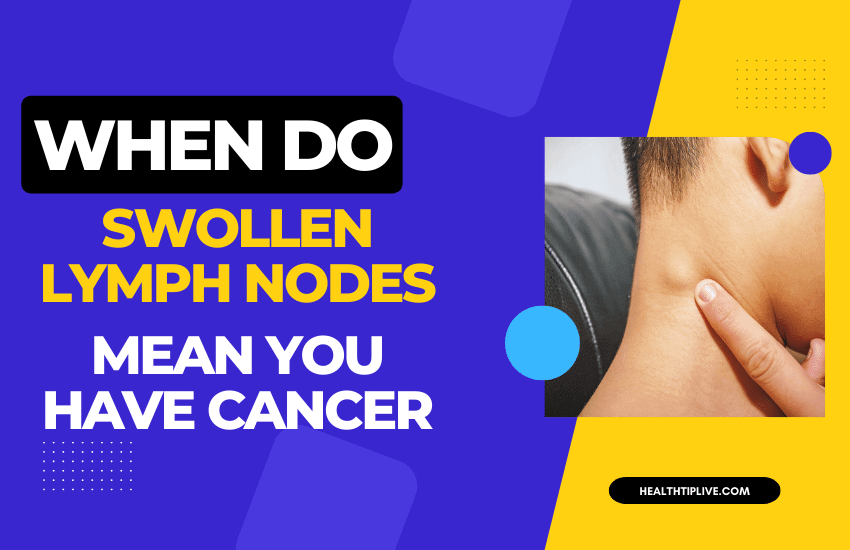 When Do Swollen Lymph Nodes Mean You Have Cancer?

Do Swollen Lymph Nodes Always Mean You Have Cancer?

Swollen lymph nodes do not necessarily mean that you have cancer. They are more likely caused by infections that are affecting your immune system and will usually clear up as your body heals.

However, malignant cells sometimes travel through your bloodstream and end up in the lymph nodes. Only your doctor can detect what is causing these changes.

Keep reading to learn more about swollen lymph nodes and how cancer can affect them.

Below are the causes of inflamed lymph nodes, what type of cancer occurs in them, how it spreads in them, and ways to detect them.

Why Do Lymph Nodes Swell?

There are innumerable lymph nodes shaped like kidney beans that exist in clusters around your body. They contain immune cells and act as filters to remove harmful germs and dead cells from your body.

When there is injury, infection, or cancer, the lymph nodes in that area swell because they are working to remove damaged cells. Swollen lymph nodes indicate that something is wrong, but only other symptoms help to exactly identify the issue. For example, high fever, pain in the ear and inflamed lymph nodes near the ear indicate a cold or ear infection.

The most common areas where these nodes swell are in the underarms, groin, and neck. Sometimes, lymph nodes become enlarged only in one spot. If more than one particular area of these nodes is inflamed, then it is known as generalized lymphadenopathy. Infections like chicken pox and strep throat, certain immune system disorders such as rheumatoid arthritis, and antibiotics such as penicillin and cephalosporin may lead to this kind of inflammation.

What Cancer Is Found in the Lymph Nodes?

How Does Cancer Spread to Your Lymph Nodes?

Often cancer spreads from where it first started – a.k.a. the primary site – to other parts of your body.

If cancer cells break from a tumour, they may travel to other parts rather via the bloodstream or lymph system. When these cancerous cells travel through your lymph system, they end up in your lymph nodes. Most of the escaped cells die before they begin growing in some other place. However, one or two cells may spread to a new area, start growing there and form new tumours. This spreading of cancer to a new area of the body is known as metastasis.

How to Detect Cancer in Lymph Nodes

The only way to detect cancer in the lymph node is by doing a biopsy. Your doctor can remove lymph nodes or take samples from one or more of them. This tissue is examined under a microscope by a pathologist to detect if it contains malignant cells. The pathologist then creates a report of their findings.

When a surgeon operates to remove cancer cells, they need to remove one or more of the nearby affected nodes. This one lymph node removal is regarded as a biopsy. However, when multiple nodes are removed, this is known as the dissection of the lymph node.

If cancer has spread to the lymph nodes, then there is a large risk that it may return post-surgery. The doctor then decides if additional treatments such as chemotherapy, radiation, or immunotherapy are required.

Now you know what causes swollen lymph nodes in the lower back or other areas. We have also discussed how cancer spreads into lymph nodes and how to detect it. If you are experiencing any of these symptoms, consult a doctor without delay so the exact cause may be identified and, if required, treated right away. Consult organizations, caregivers, or support groups to learn more about these ailments and their treatments.

How To Stay Fit and Active While Working From Home

Is your skin extremely dry or do you have psoriasis?

health write for us